What on earth was happening on Hollerbrook Farm?
First there was Pete who caused Owen alarm
And then Gabby the goat started her silly tricks
causing problems that Owen just could not fix.

From her antics on the fence under starry skies
to the aerial tricks which ruined Flo’s apples pies,
Gabby was a performer through and through.
No one could stop her—what would they do? 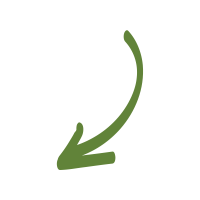 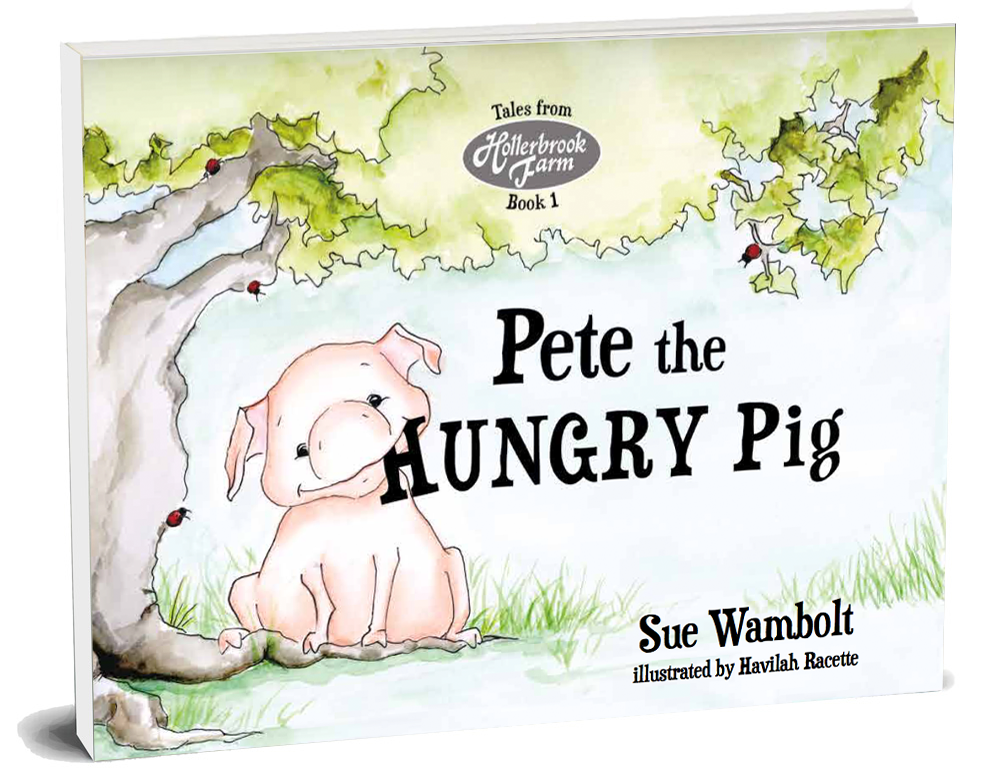 In the east of Kentucky is a small rural farm
with animals and gardens and quaint country charm.
The newest animal in the barn is a pig named Pete
who wants nothing more than to eat and to eat!
It started with his feed bag but then he kept going.
Every day Pete’s appetite kept growing and growing!
If he can’t stop eating, what will happen to the farm?
Could a hungry little pig really do that much harm? 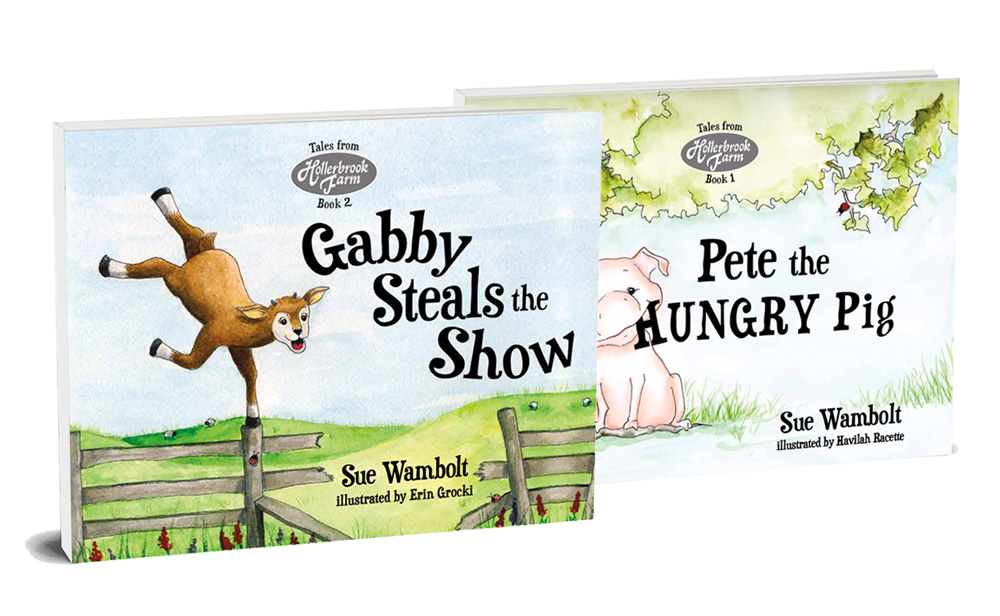 Book #1 in the Tales from Hollerbrook Farm series, Pete the Hungry Pig, was written in 1993 – 26 years ago! After the story was written I printed it out and was not sure what I was going to do with it. In the year that followed, I lost a baby in my third trimester, my mother passed away at the age of 59 and we lost our home in a fire. It was a tough year and Pete the Hungry Pig was lost in the shuffle – literally. For many years it was forgotten about as another baby entered our family and life with four little children was very busy. A few years ago I began to wonder what ever happened to the story. I searched the basement to see if I could find it (the computer it was written on no longer existed and there was just the one laminated copy). I was unable to find it and assumed that it must have been lost in the fire. Last year, while cleaning out an old file cabinet, I inadvertently came across the long lost Pete the Hungry Pig story! Now, 26 years later, my children have grown up and I have ten wonderful grandchildren. It was obvious to me that the story had to be brought to life for my grandchildren and all of the other children out there who have vivid imaginations and a love for good fun!

After I finished writing Pete the Hungry Pig it seemed only fitting to write a story about a mischievous goat. My husband and I purchased three Nigerian Pigmy goats one weekend on a whim when we were watching our grandsons. We thought it would be a fun idea for the kids and give them something to look forward to when they visited! Watching the goats jump and play has entertained all of us for years, so when I began thinking about a sequel to Pete the Hungry Pig, I immediately thought about a story involving a silly goat! Inspired by our own cute and crazy goats, I wrote Book #2 in the Tales from Hollerbrook Farm series, Gabby Steals the Show.

I am a mother of four and a grandmother to ten. From my early years babysitting to my later years as a kindergarten teacher (I have a degree in early childhood education), children have forever held a dear and precious place in my heart. Becoming a mother, and then a grandmother, has been my greatest joy and been the fulfillment of a lifelong dream. I am shy by nature and public speaking is not my forte. Instead, writing has always been the way that I best and most comfortably expressed myself. So, when my children grew up and out of the house, I re-entered the workforce writing for a local newspaper. In the years that followed, as the grandchildren came, I decided to focus my attention on them and left my job as a reporter/writer. From here, it seemed only natural and fitting that I combine my love for children (and reading to them) with my love for writing to pen children’s books. Life these days has revolved around the ten little ones who are truly the inspiration for getting these books to a publisher (see earlier post about the original manuscript from 1993). When I am not spending time with my family, I can often be found with my camera looking for something to photograph. I love crafting and scrapbooking and going on long car rides through back country roads (preferably with my camera). Suffice to say that I live a simple life with the people I love.

Meet Erin Grocki, the illustrator for the Gabby the Graceful Goat book! Erin has been a freelance artist and visual arts teacher for the past 18 years. She works in a number of different mediums from animation and photography to drawing, painting & mixed media. She received her bachelor’s degree from the Rhode Island School of Design and her master’s degree from California Institute of the Arts. Erin has worked for numerous animation studios including Walt Disney Pictures, Nickelodeon, and Olive Jar Studios and was also involved in the gaming industry at Miacomet, Inc. before pursuing her true passion—teaching. She has served on the board in New York for the Alliance for Young Artists, Scholastic Art Awards and was recipient of the Steven Sondheim Inspirational Teacher of the Year Award. Erin lives in MA with her husband and her three kids – Ely (19), Aiden (15) and Hannah (11).

As a child, life is full of everything wonderful and new. To me, it was about how I could take those things and make them into pictures. Every adventure became an opportunity to draw something new. It was playing outdoors or reading library books – though more through following the illustrations than reading the words. I wrote small stories just to put all the cute animals in my imagination onto paper. My school notes were completely covered front to back with little cartoons and when I discovered at the age of twelve that I could go to college for artwork, I was ecstatic. I received my bachelors degree in Illustration at Framingham State University and couldn’t have loved it any more. I was getting to spend hours and hours upon end doing what I loved. My husband and I met and started a family soon after. Life was hectic, but I found joy and rest in spending a few hours here and there on a kitchen table or on the floor in our 600 square foot apartment developing new ideas from the inspiration of watching my little one explore. We gave up a lot during those first few years of starting a family, adding two others to the bunch, but artwork always seemed to find its place among the burp cloths and potty training. With every new adventure of turning over an old stone to find a salamander or climbing a tree to know what it feels like to be a bird, together, we paint, doodle and scribble our imaginations onto paper to produce the beautiful beginnings off new stories for others to enjoy. I believe in working hard for the things we love.

In 1987 when my oldest son was almost a year old my husband and I thought that it would be fun to purchase land in Greenfield, New Hampshire, and build a small home there. We had dreams of starting a hydroponics farm (a subset of hydroculture, which is a method of growing plants without soil by instead using mineral nutrient solutions in a water solvent). We cleared the land and even had two greenhouses put on the property for this purpose. In the first few years that we owned the property we camped there a handful of times. As we sat by the campfire at night we talked about what we would name our farm. Dozens of names passed our lips as we sat there as two twenty-five year olds with dreams as big as the starry sky. We settled on Hollerbrook Farm as our property sat in a holler (a small valley between mountains) and there was a babbling brook which flowed through the property, winding its way through the trees from one end to the other. We never ended up building on the land – life took us a different direction as it has a way of doing sometimes – but the name remained a symbol of our dream. Today, Hollerbrook Builders is the name of my husband’s company and the sign in this picture hangs over the fence by our garage – welcoming visitors and reminding us on a daily basis to always chase our dreams. Life may change the course of these dreams, but the chase keeps us looking forward – to always set our gaze on things unseen. When I began writing Pete the Hungry Pig in 1993 it made perfect sense to use Hollerbrook Farm as the backdrop for the story. And, as a way to honor the vision and dream of Hollerbrook Farm, you will see this sign on the cover of all of the future Hollerbrook Farm stories…inviting readers into life on a rural farm. Perhaps it is what life might have looked like today had we ended up building on our property.